Small quantities, a large variety of parts and high material requirements for the production of plasma coating systems are the daily challenges of Inocon Technologie GmbH. The additive manufacturing system and the high-temperature printing material from EVO-tech save up to 90% of costs in the production of some parts. 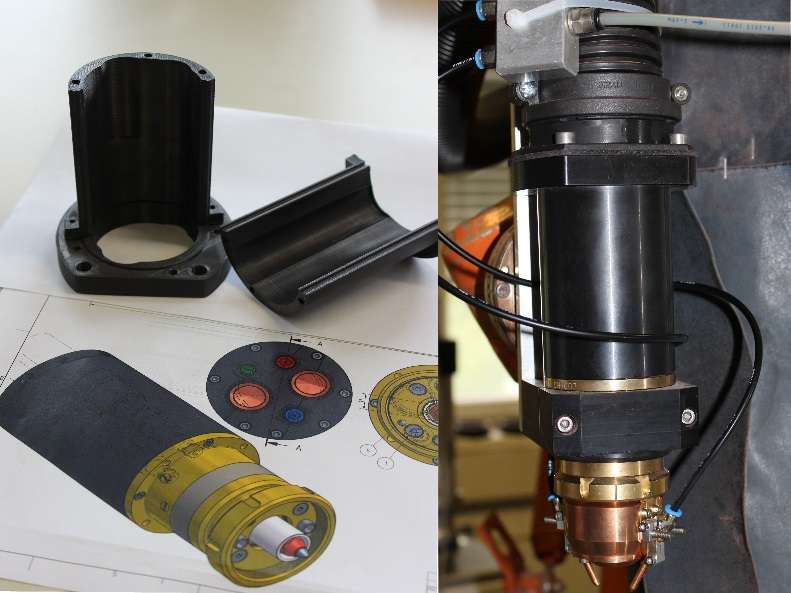 Coating for every surface

Inocon Technologie GmbH has extensive experience, success and numerous patents in the field of plasma hardening, plasma welding and soldering as well as a plasma preheater for the silicon industry. The plasma competence is expanded by a new, patented and low-wear plasma coating technology and with the finest metallic powders and vapors in the atmospheric area is still a very young and little researched technology area. Powder or steam is supplied to a plasma jet and a functional layer is deposited in the atmosphere.

In the course of the new technology development, several coating heads and a new powder feed technology for the finest powders were developed. When using Inocon plasma technology with powders and vapors, functional layers can also be applied to sensitive substrates. So z. B. Conductor tracks made of copper or tin can be applied to paper, wood and practically all plastics without damaging the surfaces to be coated.

This is a remarkable property in view of the high melting temperatures of the powders. Applications of such conductor tracks are, for example, cell phone antennas, LED structures or even layers that increase the coefficient of friction and reduce wear.

We can now manufacture individual parts and small series from engineering plastics very quickly and save an additional 90% of the costs on the components.

The application of silicate and silicone thin layers via steam creates transparent layer thicknesses of a few nanometers, which cover a very wide range of applications: the application of hydrophilic or hydrophobic layers as well as barrier, adhesive and non-stick layer properties on paper, foils and almost all imaginable surfaces .

Concrete applications are currently the coating of glass or ceramics (note: six to seven times the adhesive strength), non-stick layers on production rollers or biocidal layers for a wide variety of applications (such as anti-fouling for roofs, facades and ship hulls) and the elimination of germs in hospitals , Doctor's surgeries, public toilets, etc. The Inocon technology is by far the most efficient technology on the market to replace the layers currently used by means of PVD (physical vacuum-based vapor deposition) and CVD (chemical vacuum-based vapor deposition) with atmospherically applied layers.

The layers require comparatively very low investments with at least equivalent properties and can also be integrated into automated processes. Since it is possible to work at atmospheric pressure, no vacuum chambers are required, which enables shorter processing times and the coating of larger workpieces.

The large number of areas of application brings with it just as diverse and different requirements for the individual systems, which are often integrated into fully automatic systems. The resulting small numbers and high number of parts lead to enormous production costs in the production of the required components. For this reason, owner Dr. Fritz Pesendorfer opened the new EVO-tech GmbH production facility in Schörfling am Attersee at the beginning of February. “I was surprised that such an innovative company produces 3D printers in Upper Austria. I was particularly interested in the wide variety of materials, such as the high-temperature filament or the UV-resistant filament. So far, these missing properties have prevented us from using additive manufacturing, ”says Dr. Pesendorfer.

Shortly afterwards, Inocon Technology GmbH defined the first test application. A protective cover on the plasma head, consisting of three screwable parts, should be manufactured additively. In addition to high accuracy, temperature resistance and dielectric strength were decisive criteria for using additive manufacturing in the small-batch production of these parts. “I was surprised that PPS can already be processed additively. But I was even more impressed by the savings potential of 90% compared to machining, ”says Pesendorfer.

The reason for the cost savings is obvious. In the case of chip removal, the three components have to be milled out of 2.3 kg of raw material, with 85% of the material ending up in the waste. With additive manufacturing, only the material that is actually required is applied. In addition, the additive manufacturing system from EVO-tech runs unmanned and due to the low acquisition costs, a significantly lower hourly rate is to be applied than for a milling machine, which leads to significantly lower unit costs. "By being able to integrate honeycomb structures into our components, the 3D printer enables us to reduce component weight by 50%, which has enormous advantages for our moving axes," says designer Markus Rotter.

Great potential for the future

At Inocon, the possible applications are far from exhausted.

Due to the high dielectric strength of the PPS from EVO-tech, electronic insulation components made of PEEK should soon be replaced by printed PPS components in order to reduce production costs and increase flexibility in this area as well. In addition, the company management sees great potential for the future in the production of assembly aids and the manufacture of individual parts.